J.M. Robson is the author of the horror-thriller novel, ‘Three Little Words’ who lives in a small village on the outskirts of Dundee in Scotland. She owns a QHSE management system consultancy company, which keeps her very busy and sometimes makes it difficult to get as much writing done as she would like. She has been writing stories all her life but ‘Three Little Words’ is the first one she has chosen to publish. She is married, have one son and two grandchildren.

I actually wrote this book a long time ago but didn’t submit it to a publisher until last year. I wanted to make the supernatural killer in my book a bit different from the usual demon that can be found in horror stories. The demon in ‘Three Little Words’ is a descendant of the Nephilim, biblical creatures that were the children of angels that left heaven to mate with humans. The Nephilim wreaked havoc on the earth for the short time they populated it. So, I thought it would be fitting that their descendant also loved to see suffering, death and fed on the souls of the heartbroken.

Yes, the story was an idea I had in my head for a good while before I started writing it. I also knew I was going to make the ‘Three Little Words’ story into a trilogy.

It took about six months to write ‘Three Little Words’.

I am a huge fan of horror novels and films. When I was a teenager a relative gave me a copy of James Herbert’s The Fog. I couldn’t put it down. It was probably one of the first books that really captured my imagination. I like a good scare but I also like a good back story. The type of story that makes you scared enough to want to sleep with the light on but also has characters that you can relate to or empathise with.I think Three Little Words is that type of book and I really do hope readers enjoy reading it as much as I enjoyed writing it.

I am hoping it will be out by the end of the year.

The sequel is set in a new location.  There will be lots of new characters but a familiar face from ‘Three Little Words’ will return.  Of course, there will be more heartache and more deaths but this time there is something wrong with the killings. Why are these people being picked by the demon? They had everything to live for, no reason to be heartbroken.

I am currently working with my publisher on my next novel entitled I am the Walker which will be out in the next couple of months.

Synopsis of I am the Walker:

What happens when you are rejected by your parents for not being the son they want.  How do you react? Do you adapt to a life lesser than you deserve or do you take matters into your own hands?

Billy Davidson is a troubled twenty-year-old man.  He lives in Fort William, Scotland, in the family home with his mum and dad.

His parents despise him, his work mate and others bully him.  He is alone with nobody to turn to for help or comfort.

As a loner, he finds solace in the beautiful countryside of Scotland and spends all his spare time walking, fishing and camping in the mountains.

He continues to live his lonely life, until one day he meets a lovely young woman that agrees to go on a camping date with him.  A fellow lover of the countryside, just like him, she seems the perfect woman for Billy.

However, the date does not go to plan and he realises that she has no intension of becoming his girlfriend, in fact she has arranged the date to humiliate and embarrass him.

It is the last straw for Billy and he snaps.  He kills her and her friend.

Unable to hold in his pent-up rage, Billy then goes on a murderous spree and starts to kill off the ones he believes are responsible for his miserable life.

Then, when his mother starts drinking heavily, she turns on him and he knows that she must be next, but it doesn’t go to plan. She doesn’t die.

Now he knows he must get away before she tells the police.

Billy plans to run away, to start a new life and that is when you find out about the awful and heart-breaking secret that Billy has been hiding for eight years.

Could the heart-breaking secret be the key to his escape?

I am currently reading a couple of books.  I started both a while ago but I have been busy writing the sequel to ‘Three Little Words’ and getting ‘I am the Walker’ ready.

The two books are ‘The Bazaar of Bad Dreams’ by Stephen King and ‘I have the Sight’ by Rick Wood.

I work with a number of organisations and individuals that do amazing work in countries like Romania and Bulgaria where dogs and cats are mistreated, abused and killed in horrible shelters on a daily basis. These wonderful people help get dogs and cats off the streets and out of the shelters and into homes around Europe.  Without them, lots more of these poor animals would die. 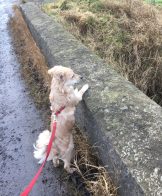 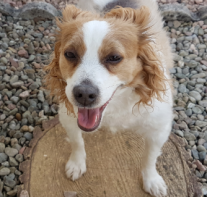 I have three rescue dogs and two rescue cats.  They are all different, with unusual personalities that make them so lovable.

Follow J.M.Robson to know more about her and her upcoming releases,

View all posts by hjbookblog